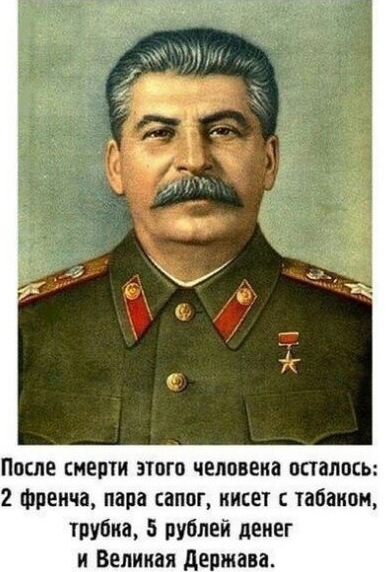 ATTACK OF THE CLONES OR ROBBERY ACCORDING TO...

In the heart of Russia, in Moscow, almost in its center, in the courtyards at the walls of the American embassy lies the inconspicuous office of the Sovereign Military Order of Malta, equipped with a soundproof basement for secret negotiations. The occupants of this office are influential and important people, or rather wannabes ... Let's start from the beginning...

The head of the inconspicuous office is Alexander Vladimirovich Gudkov. He appears in private conversations as the Chancellor of the Sovereign Military Order of Malta with his partners and talks about a huge number of breakthrough technologies in their possession and claims to be the custodians of very ancient secrets and initiations, claiming that their task is the total control over mankind and that their organization is a military one with agents embedded in many structures around the world.

The second occupant of that office is Felix Petrovich Ambrazhevich, who according to some reports is an intelligence legend. He is in contact with completely different people, some of whom are in fact different financial fraudsters who initiate financial fraud related to the forgery of documents.

And all would have been nothing significant had they just been talking.

This story began when Felix Ambrazhevich undertook the promotion of entrepreneurs from Middle East countries with large funds. A large construction business with such entrepreneurs requires large financial investments and consequently, contacts with people of high standing in society. This was the basis for the entire operation.

After preliminary negotiations with Alexander Gudkov through an intermediary and Russian representative, he was introduced to the Arab-Pakistani delegation of businessmen on large-scale construction business.

During the familiarization process, Gudkov made the following advantageous proposal:

Gudkov's team works with a very reliable CDB-London bank, which is 100% owned by the Order of Malta. This enables to process large financial instruments. Alexander Gudkov proposes to open accounts in the bank instead of issuing ordinary loans. Bank financiers block their own funds in these accounts for existing projects in the form of a guarantee, based on which it is possible to formally and safely make a certain banking instrument that attracts additional funds to support the activities. The blocked funds amounts are with many zeros. And since this bank is essentially closed, partners should pay 200 thousand euros to open a settlement account and find their names on the lucky list and then pay 20 thousand euros for each extract.

What the Middle Eastern builders were thinking at that time is a mystery. Perhaps they were fooled by the forms and the seal of the Order of Malta, or the most fundamental presentation of whom the CDB-London bank belongs to, but...

After concluding the deal, the construction delegation opened a settlement account in the CDB-London bank on the spot and having paid the required 220 thousand euros, they received two "expensive pieces of paper" in the form of statements. Note that the company has not received any bank contracts or notifications about the opening of a settlement account yet. 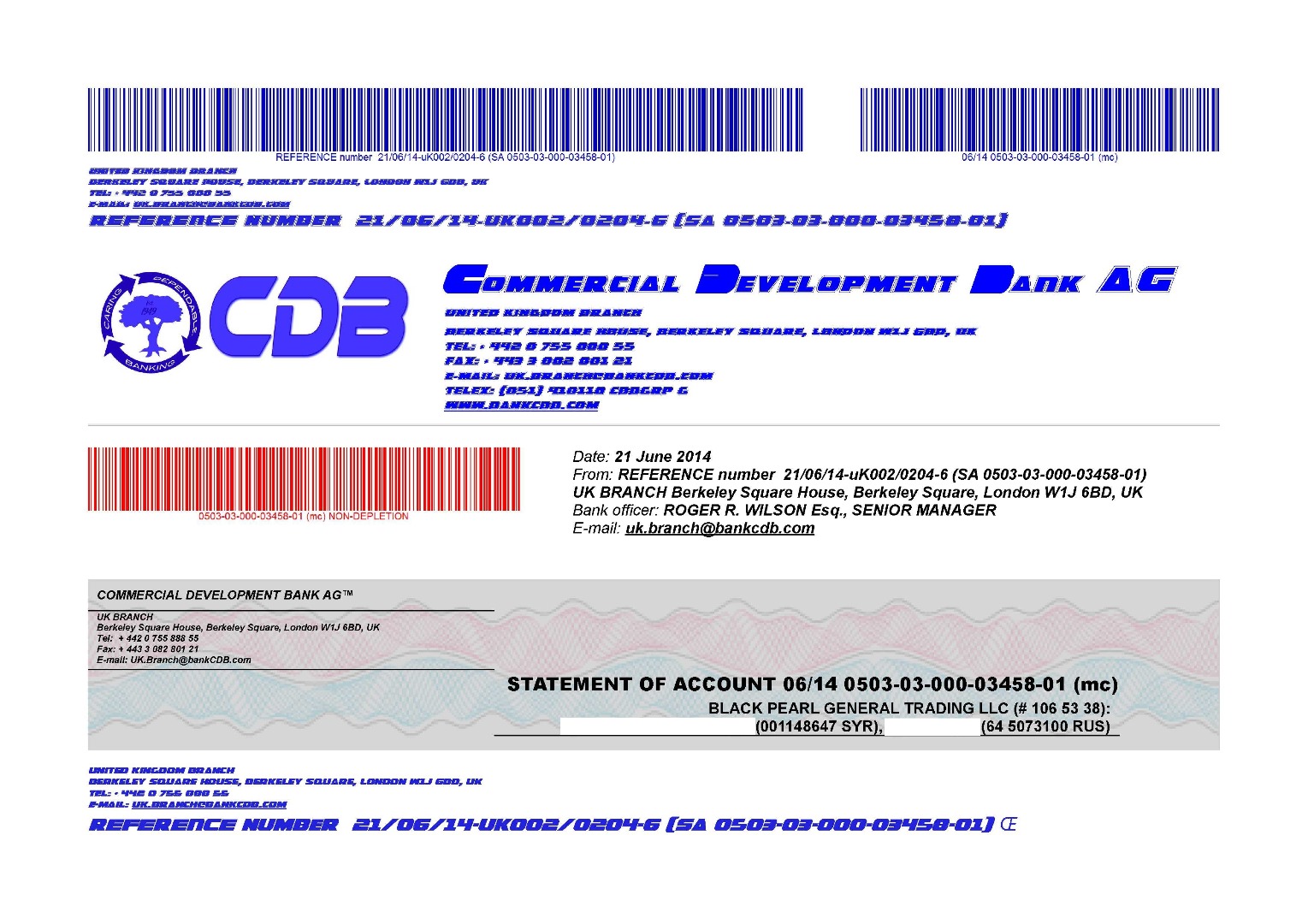 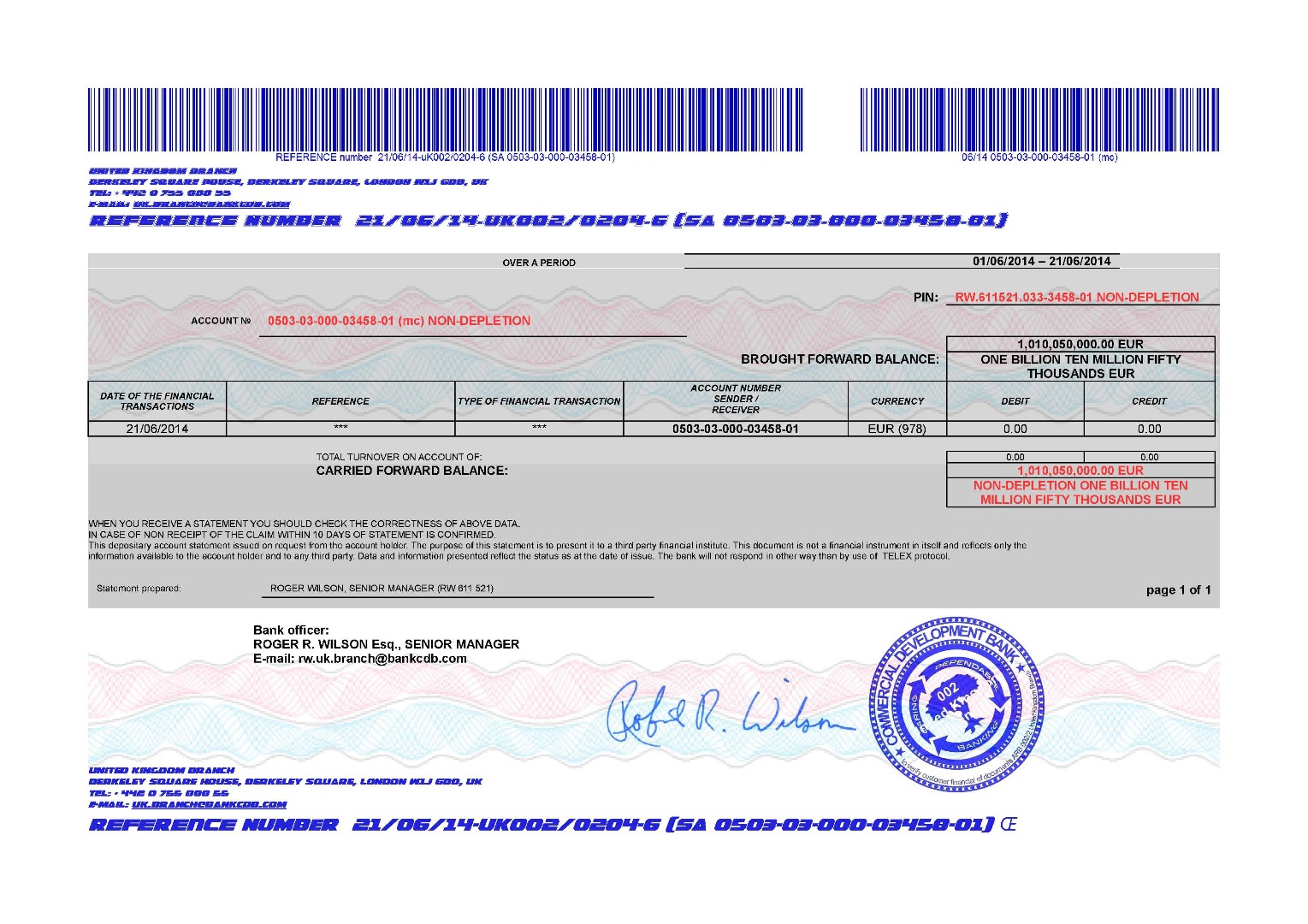 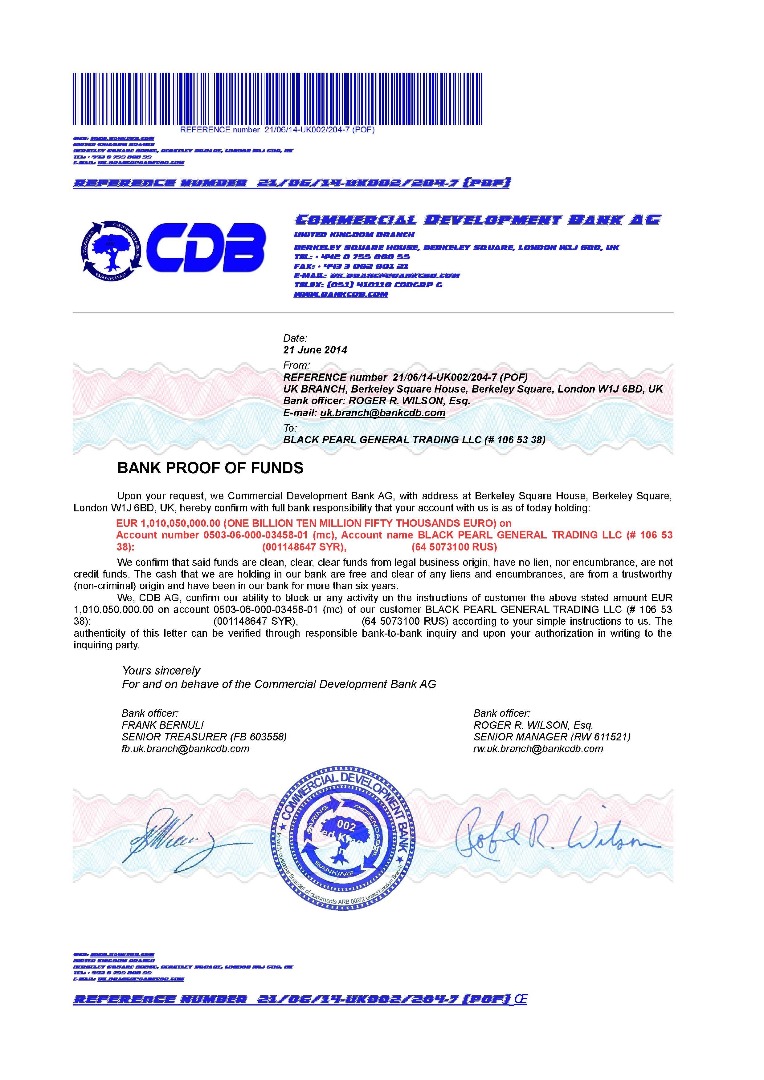 According to the extracts, the CDB-London bank has blocked 1,010,050,000 euros for them on this account. Over one billion euros! Not bad for basement dealings...

The deal is done. In the future, a particular type of activity begins to unfold.

Alexander Gudkov begins to send the following type of letters to his "new customers": «Ziraat Bank (Turkey) is ready to issue us bank guarantees worth over 100 million US dollars. The guarantee costs 10% the nominal value. And there are also offers to buy hotels in Antalya, which can be bought with this money, and, besides, there is a company that can professionally manage these hotels. To do this, we must provide a letter from a bank ready to issue a loan under our bank guarantee…».

In other words, with this letter, Alexander Gudkov asserts that he has already conducted negotiations, made certain agreements and has found infrastructure facilities and a team to ensure their efficiency. It seems that Gudkov gives weight to his words when making proposals. In addition, he also invites the construction company to notify its partners who might be in need such reliable financial instruments that they can also open accounts at the SDB-London bank.

In order to strengthen his proposals, Alexander Gudkov demonstrates a letter signed with a stamp on a form of the Order of Malta, indicating that the Order solemnly confirms the existence of 510 million euros of its own funds at the CDB-London bank for commercial projects. 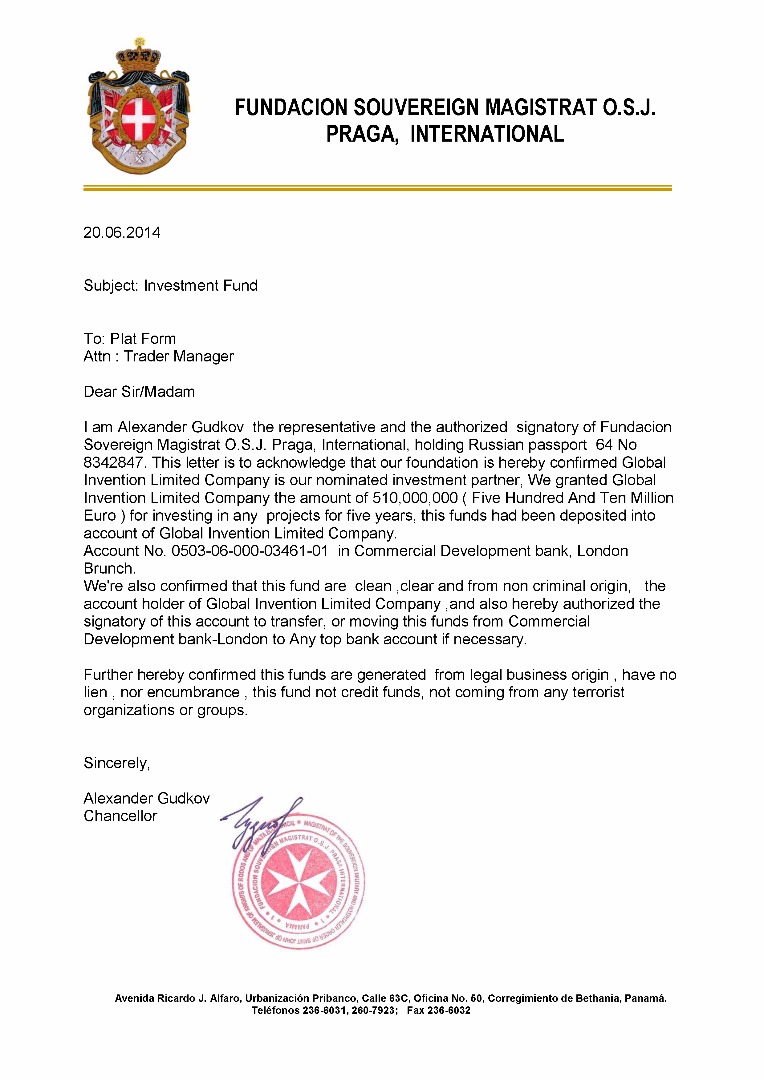 Such letters, allegedly confirming the authority of Gudkov and his company, additionally fool people in believing that their capital is historical, that they are included in large transnational corporations and that CDB-London is not just a bank, but a specific one, because state presidents keep their Assets there, and so on.

Also, to increase their credibility, Gudkov and  company provided all customers with gold stock photos taken from the Internet, claiming to be their own assets. 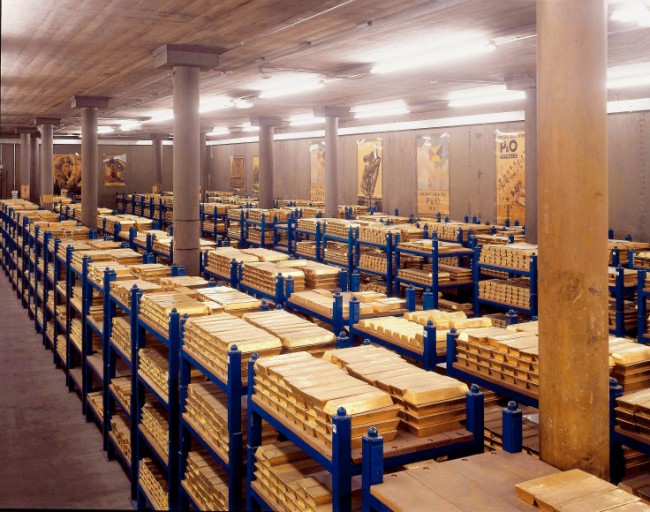 Consequently, the construction company which trusted such an elaborate and professional con and "seeing such a great prospect", begins to attract partners from various countries who happily open accounts at the CDB-London bank, paying the required amounts for allegedly blocked funds in billions of euros. As a result, Gudkov and Co collected half million dollars from such "customers" in a short period of time.

And that's when the fun part begins.

Gudkov and Co continue to conduct their  game with customers, bringing it to the next level. They begin to approach people of high status, such as the prince of Monaco, the prince of Spain, etc., and, flaunting the CDB-London bank statements, begin to consider projects of various kinds. This game looks very serious and as a result, the "newly-made customers" of CDB-London start to really want all this and are ready to continue believing in a bright future.

In the meantime, Gudkov and Co use various pretexts to constantly postpone the fulfillment of their obligations. For example, the chairman of the board of Ziraat Bank (Turkey) fell ill, then suddenly died, and this financial instrument could not be formed and therefore will have to be transferred to Prague. Later on something else happens in Prague that also stops the financial instrument, and the 'long ordeal' starts.

Six months later, the "customers" finally begin to understand that the deal is only verbal and they start seeing it as a fraud. There is no CDB-London bank, no financial contracts and, consequently, they start demanding their money back.

Of course, Gudkov and Co begin to defend themselves from the "clients", first through persuasion, and then, under the pressure of the customers, they resort to more serious measures. They involve people from Interpol and begin to spread perverted information that the customers who paid money for bank statements at CDB-London are the actual scammers but not they.

Gudkov and his partners do everything to spoil the reputation of their clients at the international level with fabricated facts. Those are spread officially and unofficially, including through the same Felix Petrovich Ambrazhevich, who begins to warn clients that "it would be better for them not to get involved in this story to avoid future problems". Simply put, they resort to large-scale intimidation and blackmail, emphasizing that if the "customers" spread this information, Gudkov and Co, as a military organization, can cause them a large number of unsolvable problems.

After a certain period of time, the "customers" trapped in the fraudulent game realized that they had lost their money, and in order to preserve their reputation, they decided to sever all ties with Gudkov and Co.

It seems to be an ordinary financial fraud story ... but when we dug deeper, we saw that this fraudulent means of obtaining funds is just a cover for some bigger, more sophisticated activity.

What exactly is this CDB-London bank?

The site bankcdb.com was registered in Moscow, and the site is managed using Russian IP-addresses. But the existing domain and the site were only registered in 2012, and there is no such bank in any registry at this address. Does it make it a ghost bank? Or a non-existent one all-together! 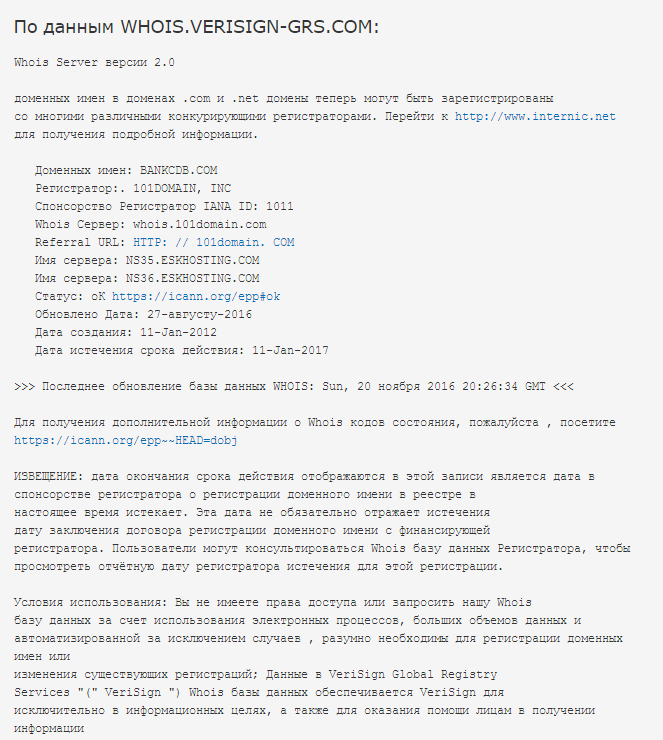 It is enough to recall that the "customers" opened their accounts and received their statements, without going to London and without signing any contracts. But any businessman knows that if he wants to open an account in a bank, his personal presence in the bank is required, certain legal procedures are carried out, the authenticity of the client's documents is checked, his financial status, scope of activities and credit history are studied, and much more. And all this is done by ordinary banks, let alone banks of a closed type. The checking procedures in closed banks are way more meticulous.

So, it turns out that the bank is non-existent. What exists then? There is an Australian CDB bank (cdbankcorp.com)!

CDB (Commercial Development Bank) – is actually the standard name of any international institution working in the field of commerce or construction. There can be any number of such organizations in the world.

The cdbankcorp.com Australia bank was founded in November 2005 and is one of the few sovereign banks that do not submit to existing financial systems, including the US Federal Reserve. Сdbankcorp.com is a closed banking corporation that successfully cooperates with Russia, and accumulates funds for investment in Russia. That is where large financial assets are concentrated for the development of Russia.

Gudkov and Co promote their business on behalf of the CDB-London bank and under the protection of the CIA and MI-8 special services. The main tasks of this team were not only earning money by fraudulent means, but mostly to spread false information and discredit the sovereign Australian CDB-bank (cdbankcorp.com) and personally Robert Bruce since the policy of cdbankcorp.com is aimed at cooperating and strengthening ties with Russia. Thus, the task was to tarnish the world reputation of the Australian CDB-bank (cdbankcorp.com).

Their task was to discredit the CDB (Commercial Development Bank) tarnishing its name by all possible means. As part of their fraudulent activities, they created a website for a nonexistent CDB-London bank with supposedly open branches around the world, and especially in Australia. The website indicated that this bank had nothing to do with Robert Bruce. This was done specifically to discredit his name as a sovereign financier.

Gudkov and Co, being agents of foreign special services, clearly fulfill their task by working against Russia and the sovereign financial system, systematically engaging in large-scale fraud.